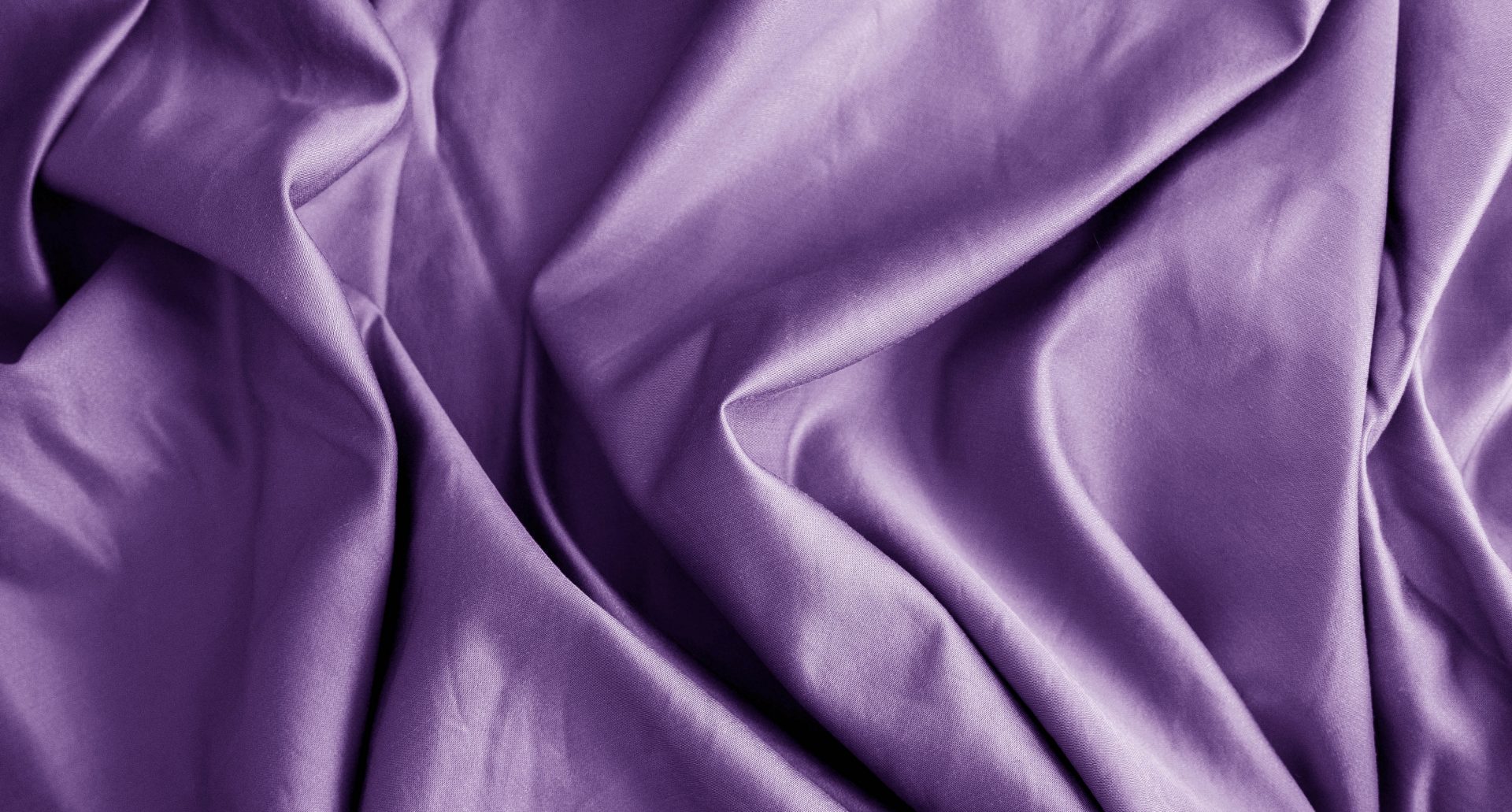 Founded in 2015 by INSEAD graduate Alphonse Reddy and funded by entrepreneur Anand Morzaria, Sunday has largely slipped under the radar as companies like Wakefit, SleepyCat, who entered the market a couple of years after Sunday did, have raked in millions of dollars in revenue in much shorter duration. But it does have quite a lot going for it – a competent and seasoned founder, a talented product designer in Hiroko Shiratori and a slew of certifications (and clearly, they do love their certifications). Lastly, they offer three different types of mattresses catering to different customers’ needs. Having tested all three of their mattress types, and (as is true in nearly all of cases), their ‘mattress in the middle’ (it’s shame Malcom in the Middle never got big in India, but I digress) is their best offering.

The Ortho Plus 4 tries to be several things at once – an orthopedic mattress, a memory foam mattress – with some latex sprinkled on for good measure – but for our money, it does succeed in being one thing – a fairly solid option for those who “need” a hard mattress.

What are the layers in Sunday Ortho Plus 4?

To begin with, we have to commend Sunday for not falling into the trap of giving unnecessarily complex and largely arbitrary names to the materials they use. Like most of its competition, the Ortho Plus 4 also has 3 key layers –

Latex – Right, underneath the 100% organic cotton cover (something that they definitely want you to know) lies a 2 inch latex layer, which gives the mattress increased breathability, resilience and cushiness – but cooling qualities, something that they want you to believe – not so much. But it still is an interesting choice of materials and for the most part – it works!

Memory foam – The middle layer, ‘memory in the middle’ (okay this was the last time, definitely..), narrowest of the three at just an inch, adds to the comfort of mattress, giving it ‘molding’ qualities/pliability to your body.

High Resiliency Foam Layer – The HR layer is the biggest of the three by a long way – and, as you’ll find out as you read on, does not do what it is supposed to all that well – distribute body pressure across the surface and blocking motion transfer.

Since, writing the Emma Original review, we have been following a set procedure to give every single mattress that we test a level playing field and a chance to dethrone the Emma “OG”. Hence, friends and partners were enlisted, arrangements for a variety of tests were made and collectively, a large number of nights were spent in our office. Upshot – some enjoyed their time with Sunday Ortho Plus 4 than others, but nearly all came away with increased appreciation for a mattress brand that was never more than a niche little blip on our radar.

How did it arrive?

We ordered our fourth iteration of the Ortho Plus on the company website (after a somewhat lengthy, unsuccessful dig on Amazon) and it arrived in 8 days in a non-descript brown box – which hasn’t given us a whole lot to talk about other than it gives the mattress a transitional home. The only thing that we noticed was how big the rolled-up mattress and the box seemed – as it weighs as much as the Emma Original, but the Emma Original’s box looked much more compact. This made carrying the mattress to our second-floor office trickier than we would have liked – one of us was so gassed by the end that they forgot to take a photo of the box.

The Sunday Ortho Plus 4 lucked out big time as the first couple of days that we spent with it also happened to be couple of the wettest days of the year, and commuting problems aside – those days were like a blueberry cabernet ice pop at noon on a June day in the Northern Plains. The distinctive, lingering chemical/latex smell mélange was overwhelming at first, but it became less and less prominent as the time wore on. One thing that most of us picked up and reported on was the firmness of the mattress – it somewhat fails to find that sweet spot between the bouncy feel of a latex and body-hugging properties of memory foam that we were hoping for. It also leaves a lot to be desired when it came to cooling but benchmark in this regard, the peerless Emma Original, has set an unreasonably high mark, all in all its not nearly as bad as some of its other competitors.

To judge how the Ortho Plus 4 coped with motion transfer, our team members brought in their partners and were instructed to do whatever they could to bounce their partners off the bed. Upshot – Ortho Plus 4 finally met its Waterloo – we are struggling to say positive things about their mattress in this regard.

Granted, our tester did everything with more effort than usual – rolling around while the other slept, got in and out of the bed violently – our testers are instructed to test the mattresses’ limits and they do the same for every single mattress we test. And sadly, this is one thing that Sunday Ortho Plus 4 is downright awful at.

Nearly every single one of our testers reported enough reverberations from their partners’ movements that interrupted their sleep. Here are a couple of tests we filmed during the day that show just how inadequate the Ortho Plus 4 is when it comes to keeping motion transfer at a minimum.
As you can see, it really did not take long for our tester to knock over the bottles or the book from our other testers’ head.

How firm is the Sunday Ortho Plus 4 mattress?

On to the most exhaustive part of the review – firmness. And its where the Ortho Plus 4 is more of mixed bag than in any other area. If you and your body are more or less used to of hard mattress and are now incapable of trying or outright unwilling to try a cushier mattress – then Sunday Ortho Plus 4 just might be for you. And given just how unforgiving overly firm mattresses are for your back – you might want to shake that habit. We’re not saying that the Ortho four is hard to the extent of being uncomfortable – it’s just something that you do notice if you are used to of sleeping on a softer mattress. We would rate closer to medium than being excessively firm.

To get a balanced take on the firmness, we brought back our old friends (four male, five females, ranging from 45 to 102 kgs in weight) and made them have a lie down. Then they all rated the level of firmness from 1 to 10, with 1 being overly soft and 10 being the hardest mattress they have ever come across. The results were more or less predictable – with the majority of testers giving it either a 6 or a 7 – with one tester rating it as high as a nine. 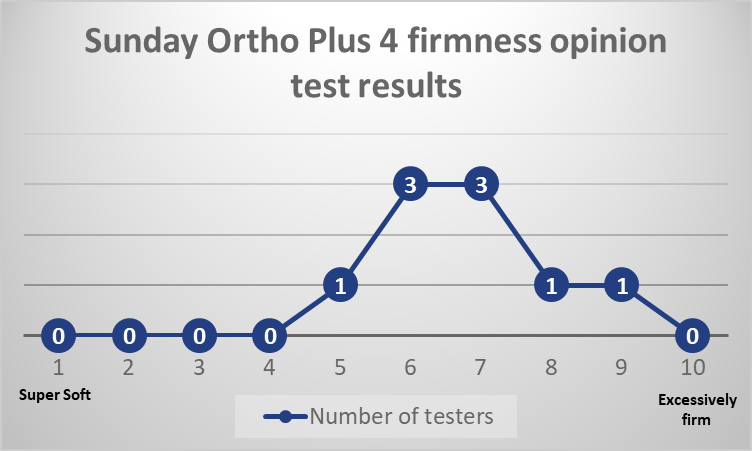 On to the weight test (below) we went, and it was time to air out our old friends – the 15kg medicine ball and the 20kg kettlebell. These tests are deigned to test how the mattress would react to a large amount of pressure applied over a larger surface area, as is the case when we sit down, and smaller area, which for example is when put our knee first on the mattress as we climb up on the bed, respectively. 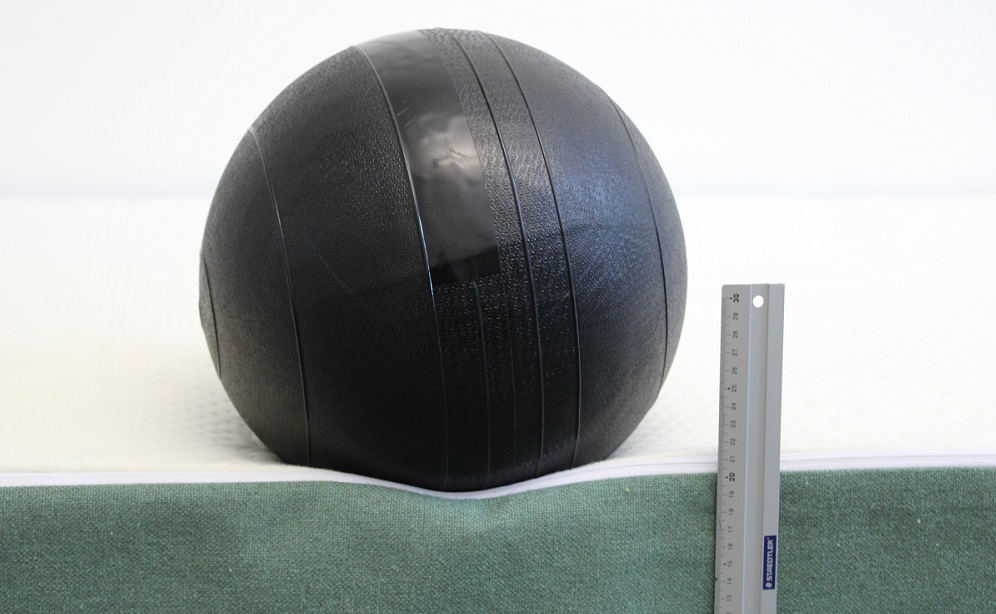 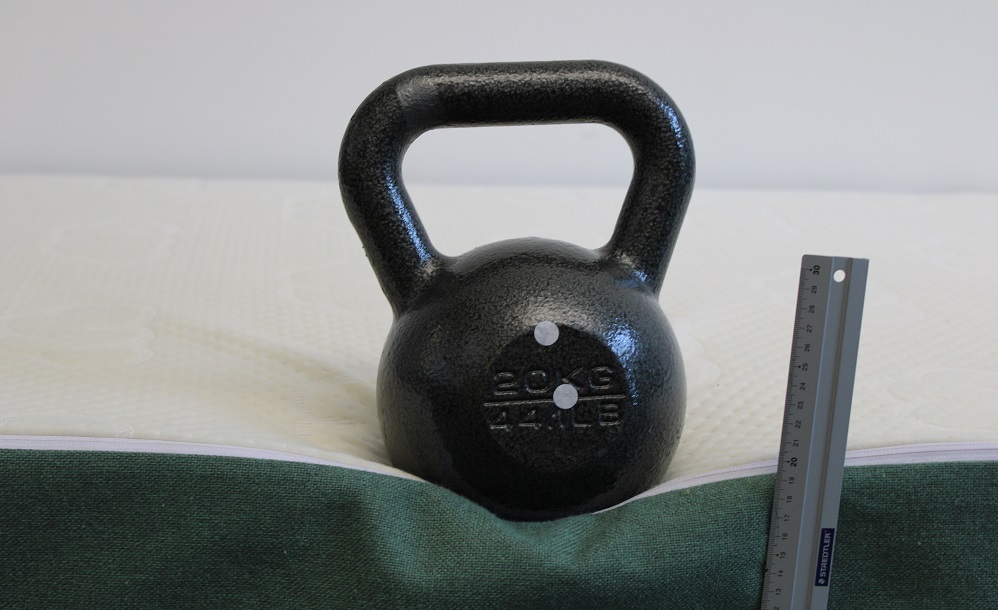 As you can see, there is some give in the mattress – which does make us question its “orthopedic” qualities – as true orthopedic mattresses do not sink at all, but it’s more or less passable. The same goes for the structural integrity of the mattress – which shows the build quality is an area the Sunday Ortho Plus 4 fares better than most of the other Indian mattress makers’ offerings,

Our final test involved a spinal alignment test where we brought out our trusty laser light to show how supportive the mattress is – the straighter the spinal alignment, the more ideal the sleeping posture is. As our test showed (pictured below) – 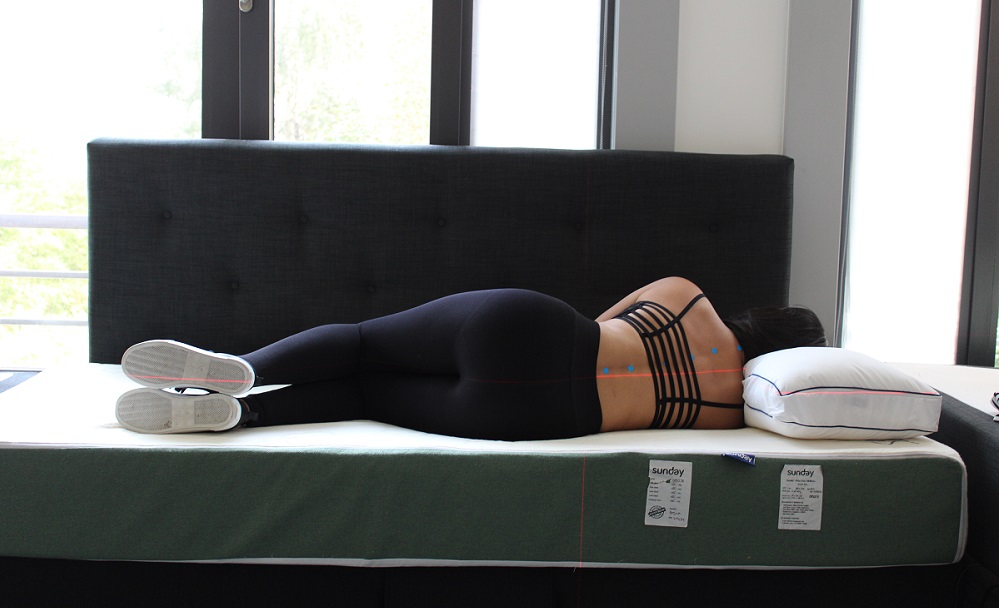 As you can see, the Ortho Plus 4 does not live up to the “Ortho” part of its name as it does not support the parts of your body that jut out – your shoulders and your hips – something that Orthopedic mattress are ought to do. It isn’t nearly as bad as some the more popular brands we have tested, which also use the word “orthopedic” as a marketing gimmick, but, suffice it to say – we were expecting better.

How the customers rate the Sunday Ortho Plus 4 mattress?

Although Sunday Ortho Plus 4 has been on sale on Amazon for quite some time now – somehow it has only amassed 7 reviews with an average rating of 3.9 stars. And although, as of writing, there are nearly 1000 reviews on the company’s website, but they an average customer rating for those reviews is nowhere to be found. But the reviews do seem largely positive.

Sunday Ortho Plus 4 does get a lot of things right but it does come up short in couple of key areas. Nonetheless, it is still one of the best mattresses that you can buy in India – sadly, at its price point, you would be hard pressed to find anyone who will prefer it over the, as of now, incomparable Emma Original. We just wish they had used denser foam or employed pocket and/or bonnet springs and made it a real, fair dinkum “orthopedic” mattress.